1993 Moving In With Kris and Discovering K

The apt Kris and I moved into was on Gilbert in Dallas. It was a loft with the bedroom upstairs overlooking the living room. Brooke was about to throw her first big party in Dallas. She was bringing in Michael Alig and his gang of club kids to host the event. I was asked to DJ as was Robert Taylor. 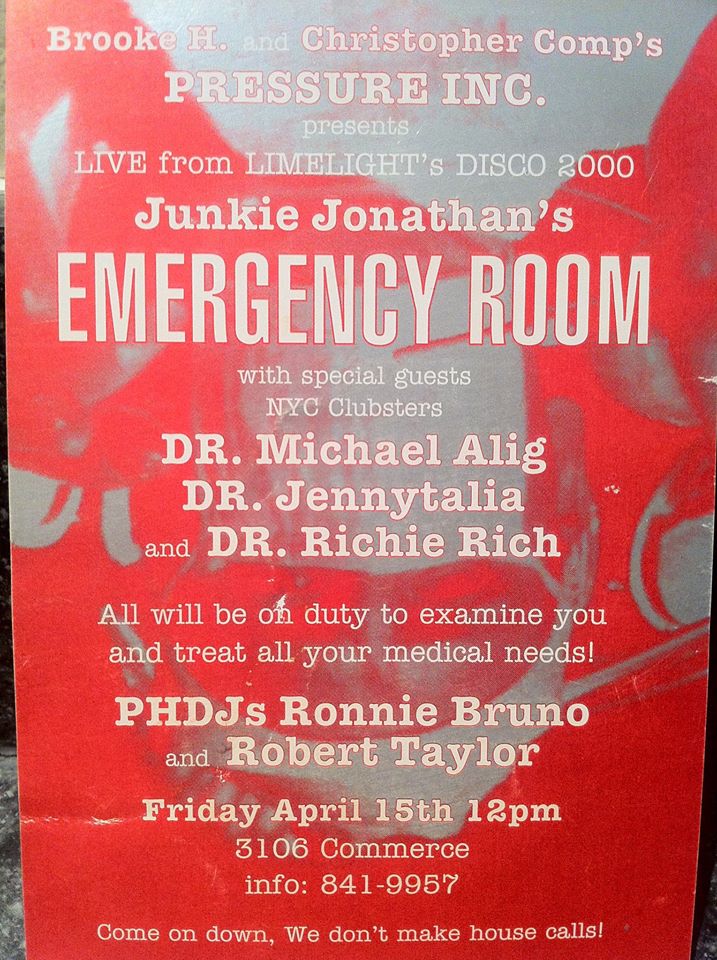 At the Emergency Room Party we took all the DJ equipment down to this old warehouse that Brooke had leased on Commerce and barely got it set up before the guests started arriving. Since Kris and I basically had all the lights fog and sound at our apartment it was just a matter of moving it to the space. Brooke had gotten tons of syringes and other hospital supply stuff to give the guests as they arrived. People were showing up in scrubs and as nurses and covered in blood. The bloody emergency room was just one of the parties was created by Michael Alig and usually hosted in NYC but as the club kids were gaining popularity they were taking the parties on the road more frequently. Just as the warehouse was filling up someone came over and said the cops were on their way in. Everybody started smashing out the back exits and very casually walking down the alley. Imagine the horror of the cops finding hundreds of syringes on the floor and thinking they had just prevented a huge "drug" party from happening. It's weird because they did stop a drug party that I'm sure just continued all over Dallas that night but it had nothing to do with the syringes they found scattered everywhere. Anyway Kris and I quickly went back after the cops left to get the equipment and of course someone tried to pull a fast one by taking the fog machine. We got it back tho bc ppl saw the person run off with it.
Special K aka Ketamine...about 1993 Kris and I started experimenting with K. We got it from a vet where Kris worked and we would mix it with koolaid and drink it. Eventually, like a lot of other users , we started mixing it with vanilla, drying it out in the oven and snorting it. Of course after a little while I decided it wasn’t for me because it made me feel out of control. However most of the party boys we hung out with were crazy about it.
Posted by Unknown at Tuesday, August 14, 2018 No comments:

Sometime near the end of 1991 I got a call from an old friend from Wichita Falls, Royce. He had been living in New Orleans and decided he wanted to move to Dallas. Since Peter and I had broken up I had moved out of his apt in Denton and in with Jammie and a few other guys in a huge yellow house on Cole in Dallas. As soon as Royce got to Dallas we went and found our own apt. We moved into a 2 bedroom apt on Bowser Ave. I was working at Oak Lawn Records and Royce got a job at Black Eyed Pea. Most nights when Royce got home we would laugh until time to go to sleep. Royce is one of the funniest people I've ever known.
From the outside 4015 Bowser looked pretty nice I guess. For around $700 a month it was ok. A U shaped complex with eight or so apts overlooking a pool. Wood floors downstairs and carpet upstairs in our bedrooms and bathroom. Our first night there we went out to a club on lower Greenville, Fishdance. Rob Vaughan played breakbeat which was huge in Dallas at the time. I remember being so drunk when we got home. I woke up burning up with the heat blasting. I had a splitting headache but it was ok we had our own place. We went out almost every night of the week. We went to Club One, the Wave and for a short time I played at a bar at 2525 Wycliff. Royce bar tended, or tried to anyway. Frank also got me a second job at a yogurt store on Greenville Ave. Every week at the yogurt store I would take my earnings and buy party favors and take them to the club and sell them. This began to supplement my income. Not anything life changing but at least I was able to pay rent and eat.
Royce and I would have these after parties after a night of partying where the word would spread like wildfire. Many early mornings our apt would be literally wall to wall people. The smell of smoke from the amount of cigarette smoke was overwhelming. We would do tons of coke until everyone was gone. Inevitably I would fall into that intense depression caused by cocaine use. The worst of it only lasted about an hour but awful anyway. Royce and I continued partying and generally having a good time until one weekend in November 1992. A friend I had met through the record store, Bryan Raughton, was visiting from Lubbock and was bringing a friend with him. His friend was Kris and ended up being my boyfriend for the next ten years. That first weekend Kris and I went to club one and hung out together for the rest of the weekend. When it was time for him to leave we decided to keep in touch but we only talked on the phone a couple of times and then kinda fell out of touch. Then one night about a month or so later Kris showed up at my door. He was in town at a concert. This time Kris stayed for a few weeks until his car arrived. A new 3000gt that was delivered to my apt. He drove home, rented a uhaul and drove back to Dallas and moved into the apartment on Gilbert we had found. It wasn't easy telling Royce I was moving in with Kris but it all worked out.

After David passed I kept busy by partying and promoting Mary and the Acid Queens. I remember her performing at Below Xero, at 4001 Cedar Springs, formerly 4001. Seven or so years had gone by since I first came to 4001 with Charles Hall. Now Mary XTC was performing there. Tony Fair was the DJ. Below Xero was his new gig after the Empire closed.
Posted by Unknown at Sunday, September 22, 2013 No comments:

It was nearly Christmas so I went to Wichita Falls. I remember going with my Mom to shop and breaking into tears in the middle of a department store. Returned to Dallas. Mother had written something nice about David so I thought I would read it at the service. It was held at a church at the corner of Mockingbird & Inwood. Everytime I drive by there I still think about him. On the day of the service it was sunny and cold. I got up to read the paper. I almost got to the end but before I did I completely lost it and walked back to my seat. So many people crowded into the small chapel. I was a little embarrassed but it happens I guess.
A lot of what I learned from David Hayes remains with me today. I don't think I would be near as strong a person had I not met him. It will be nineteen years this December 2009 that David died.

Vote for RONNIE BRUNO at http://thedjlist.com

My Other Blogs and Favorite Links